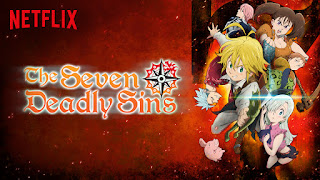 This weeks anime is going to be a weekly post that I will start covering what anime I watched that week.  For the most part it will be one anime series a week unless I feel the need to post more than one. Seeing as I watch anime everyday I thought it would be a good idea to share what I watched that week and give brief thoughts on it. This weeks anime is Nanatsu no Taizai: The Seven Deadly Sins 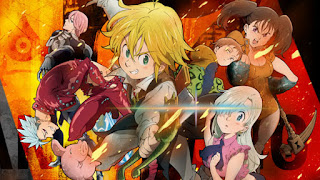 In the kingdom of Liones among the Holy Knights charged with protecting the kingdom there was an order of Holy Knights who were the strongest and cruelest of them all called The Seven Deadly Sins. This group would be framed for murdering the head Holy Knight and be disbanded and branded as traitors to the kingdom. They were called The Seven Deadly Sins because each one had previously committed a heinous crime and sentenced and judge by the kingdom of Liones before joining the group. They also each take on the characteristics of the sin they are judged by. I could go into huge detail on each but that would ruin part of watching the anime. So I will just briefly describe each. 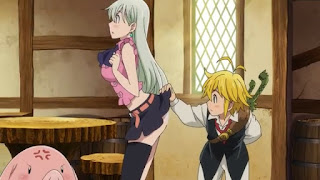 So when the kingdom of Liones gets taken over by the Holy Knights the deposed princess sets off on a quest to find the disbanded Seven Sins. She hopes in finding them they will help her take back her kingdom. She happens upon Meliodas the leader while in a tavern and he protects her. When she finds out who he is she asked him will he help her find the remaining 6. He agrees and they set off on their journey.

I stumbled upon this anime while I was bored and searching through Netflix for something to watch. This anime popped up on the recommended list and I decided to watch it. This anime turned out to be a pleasant surprise and I am eagerly waiting the second season so I can finish finding out about each of the members. Each character's back story is rich with history, and intrigues. Some of the characters backstories intertwine with each others and shape out who they become and their future relationship. If you're looking for an anime to watch this one is a good watch.

For more anime recommendations click the anime link above or HERE
Posted by Jon Shaw at 8:00 AM