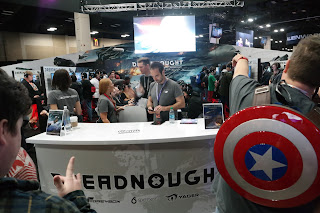 When you first walk into the expo hall you are greeted with a gigantic booth which houses the game Dreadnought. This game made by Greybox for Redux! Games LLC has you taking control of these huge battleships in a sci-fi universe.
You will be able to fight in team death-match or team elimination in several maps. You will have the options to choose between five different ships which you can customize its armor and weapons. 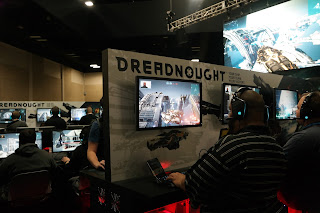 Space battles, and flying really are not my cup of tea but playing this game was actually easy to get the hang of. Its not as fast pace as other shooters of its kind and it has you really rely on your team for victory.  My first time on the game I lead my team in kills with no deaths and we took the victory. I did not get a release date but if you visit WWW.GREYBOX.COM and click on the game it will take you to a site where you can sign up for the beta.