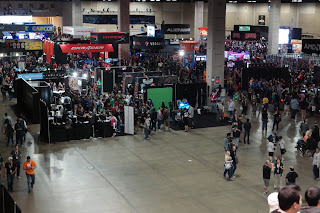 Day 2 of Pax South 2016 I headed to the convention on a mission to try to find things I may have missed from day 1. Day 2 had a few gems and we will briefly talk about a few.

For starters I glanced over the Capcom booth and missed what would be one of my favorite games of the convention in Umbrella Corps. This game was extremely addicting and fun to play. Its a tactical team based shooter set in  Resident Evil universe and basically you take on each other while zombies roam the map.

Next I stopped by the CinchGaming booth to check out the controllers they had on demo. I have been looking for a PS4 equivalent controller to my Xbox Elite controller and Cinch Gaming will probably be who will satisfy that need. You can get more on that from my article here.

All around the exhibition floor you will find PC companies everywhere. Each company had their fully loaded PC's up for display and demo. Here are a few. 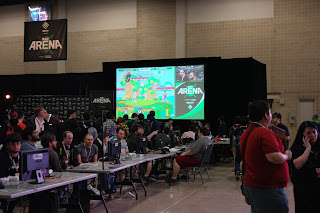 Next up I stop by the Pax Arena and checked out a match that @MVG_Mew2King was having in the Smash Bro tournament.

The Astro booth was next as I checked out the Plants Vs Zombie Garden Warfare 2 demos they had as well as picked up a Xbox1 Mix amp and Black ops 3 Mod kit for my TR headsets.